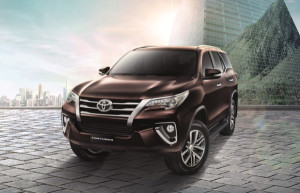 The revolutionary new model of 2016 model Toyota Fortuner is now available at Jim Autos Thailand. Email us now at [email protected] to get your Fortuner now. The new and improved builds on the revolution that all New 2016 Toyota Hilux Revo has brought in the pickup world. All new Fortuner is also bigger and wider and is mightier and bold.

Toyota Fortuner 2016 model is based on ESTEC GD Engine 2800 cc as the top end Toyota Hilux Revo. As you will see it is a completely new look and it is also a completely new vehicle with all the comforts of a genuine Sport Utility Vehicle. Toyota now wants Fortuner to be known as Prado’s cousin and not as a Hilux sibling.

The 2016 Toyota Fortuner is underpinned by an updated IMV platform that will comply with the Toyota New Generation Architecture (TNGA). Akin to the current model, the next-generation Fortuner will boast of a ladder frame chassis, which should mean that the ruggedness  would remain unaffected.

All variants are fitted with trailer sway control, which is designed to assist if a towed vehicle becomes unsettled by crosswinds, bumpy roads or sharp turns of the steering wheel. Maximum braked towing capacity will be three tonnes for the manual and 2.8 tonnes for the auto*.

A part-time 4×4 during day-to-day driving, owners can turn a dial to access Fortuner’s impressive four-wheel-drive ability in high or low range.

Automatic transmission is now 6 speed and is selectronic so you get the convenience of auto and power of manual at your fingertips. 4WD technology has now also been improved.

Sharp headlights, chrome accented bumper and a V-shaped grille gives Fortuner’s front a distinctive look that makes it different from not only Toyota Hilux Revo but also earlier versions of Toyota Fortuner. In the rear horizontal tail lamps are connected by a strip of chrome trim. Fortuner 2016 now also sits on a new stronger frame designed to withstand roughest of conditions.

2016 Toyota Fortuner’s wheelbase length remains unchanged at 2,750mm but it is 90mm longer in overall length and 15mm wider. It is though 15mm lower in height.

Semi-independent coil spring set-up has been replaced by a more sophisticated multi-link layout for better balance between ride and handling.

On the ride and handling front, an all-new frame bolstered by cross members, side rails and suspension towers that have all been strengthened, enhancing the torsional and bending rigidity of the frame. This not only improves durability but also drive quality and safety. The suspension uses a double wishbone at the front and a four-link suspension at the rear combination that has been redesigned for optimised comfort. An additional rear stabiliser has been installed to aid on-the-road smoothness and stability.

This is where Toyota has made its biggest push to make it look more upmarket. The slew of luxury, comfort, convenience, safety and driver assistance features make it look like a Toyota Prado than Toyota Hilux.

Toyota Fortuner pricing has increased now to account for all the new features and improvement. The price will increase once again next year when Thailand government increases excise duty on all SUVs. Buy your Fortuner before it is too later.